IoT in agriculture: Making way for a new revolution 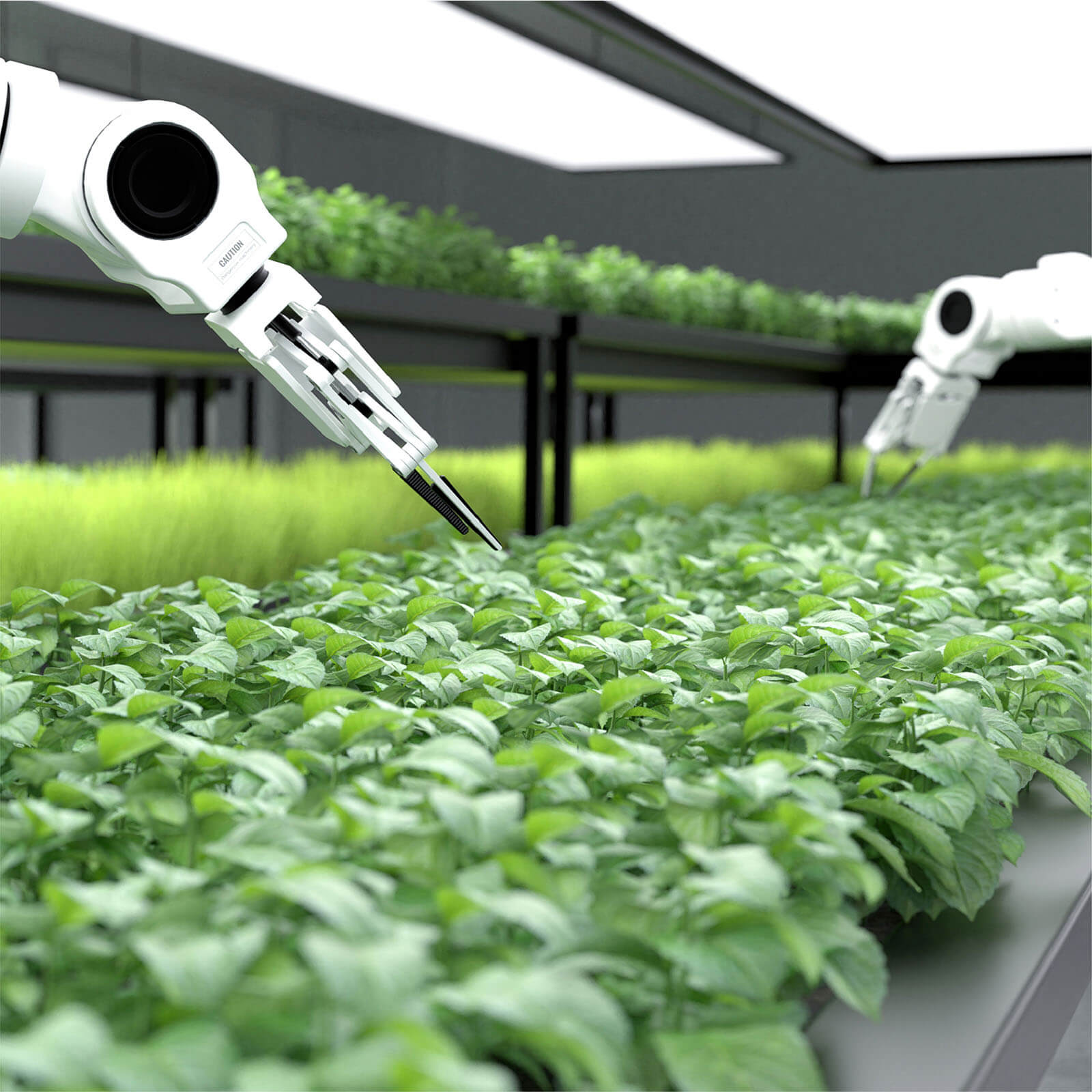 IoT in agriculture: Making way for a new revolution
Share

Between 10,000 BC and 8,000 BC, the human race witnessed a major step in our evolution – the agricultural revolution. This event paved the way for the transformation of humankind from nomads relying on hunting and foraging, to settlers focusing on agriculture. One of the oldest industries, the agricultural sector has undergone various changes over the ages, adapting to different scenarios and evolutions.

In the 17th century, inventions like the seed drill and the cotton gin caused further changes , reducing workloads while increasing production. During the 19th and the 20th centuries, tractors, chemical fertilizers, and grain elevators became the factors of change. These innovations increased the output quantity and quality to whole new levels while decreasing the workload for humans even further.

The challenges the agricultural sector faces are not the same as a decade ago. IoT, one of the most popular technologies, IoT in agriculture plays a crucial part in helping agriculture rise and meet the ever-evolving demands. 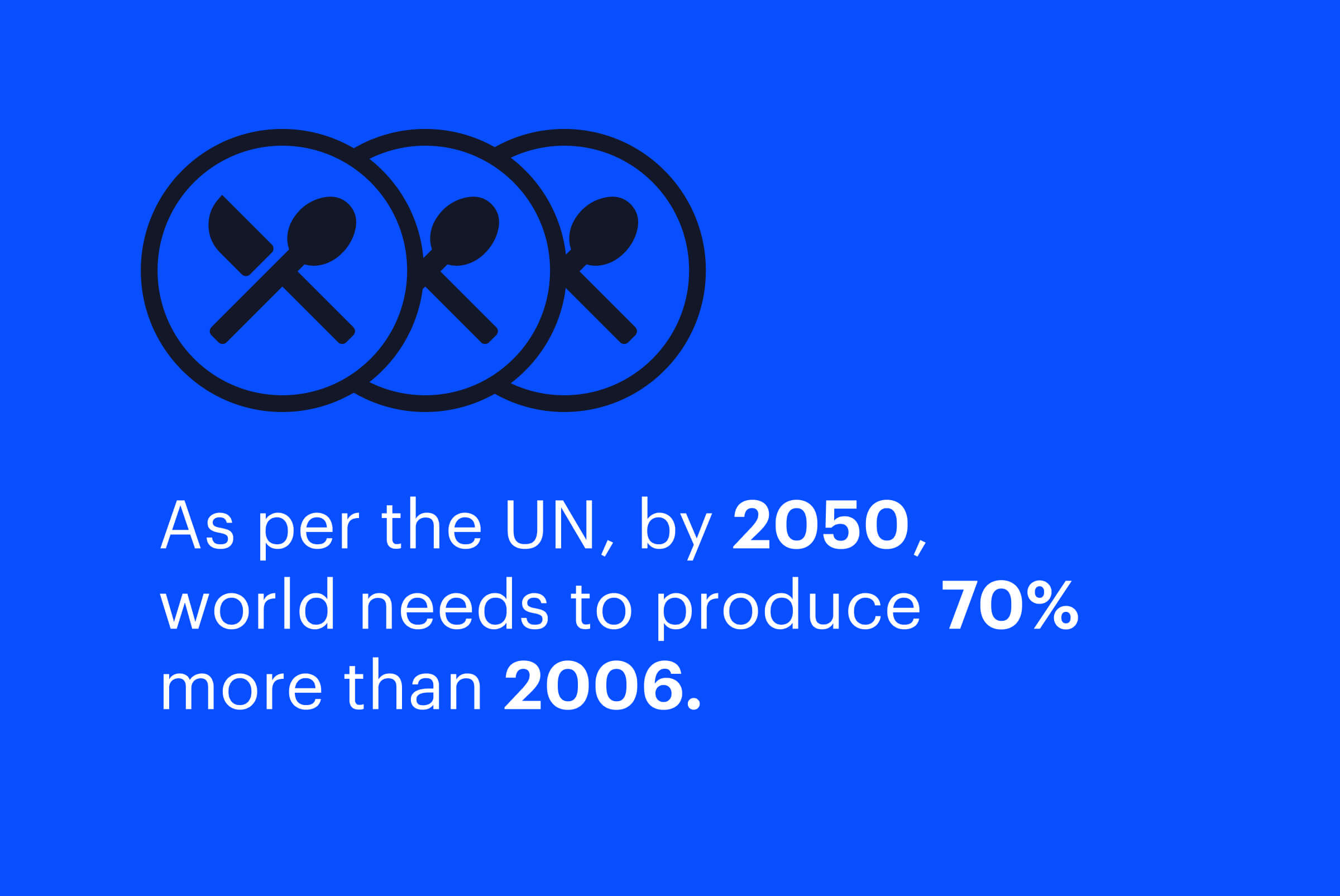 Ever since humans decided on settler agriculture over a nomadic lifestyle, agriculture has been the key to the survival of mankind. Farming is the primary source of livelihood for many people across the globe. Over 19% of our world’s population seeks employment in this sector.

Considering just India alone, 58% of the population depends on farming as their primary source of income. In the USA, agriculture occupies 40% of the land. Even still, 9.2% of the world’s population live in extreme poverty, unable to find the means to satisfy their hunger. Scientists expect the world population to rise from 7.6 billion at the present day to 9.1 billion by 2050. This means that we must adopt newer ways to increase the farming output. The Internet of Things (IoT), along with technologies like Artificial Intelligence (AI) and robotics, display the potential to empower the farming sector and maximize productivity.

The grave challenges of the industry

Though every industry has its own set of challenges, they are a little more extreme in the agricultural sector. With food and clothing being essential commodities, farmers need to get through a plethora of obstacles to meet the rising needs of the rapidly exploding population. According to a special report (2019) by the World Food Programme, 821 million people suffer from starvation, 10 million more than in the previous year. These stats mean that 1 in 9 people suffer from hunger worldwide.

The agricultural land around the globe suffers from various factors. Climate change, natural disasters, and land degradation are key factors that damage farmlands. Let’s have a deeper look at these factors.

Climate change is real and affects every single one of us badly in some way or the other. The agricultural sector is both a victim and an offender when it comes to climate change. Natural disasters like floods, droughts, and heavy storms harshly affect crops and farming lands. On the other hand, agriculture is also one of the major producers of greenhouse gasses, which are the primary cause of climate change.

The high amount of food and agricultural waste produced is alarming. According to the United Nations’ Food and Agricultural Organization, over 1.3 billion tonnes of food gets lost or goes to waste. These statistics concern the food that humans alone consume,never mind the wastage of cattle feed, manure, and so on.

The more the waste, the more greenhouse gas emissions. Agricultural waste also affects the margin of profit for the farmer.

Impact on the soil

Farm lands are prone to soil erosion due to various factors. This also takes a heavy toll on the productivity of farming.

The Internet of Things (IoT) has disrupted all industries, and agriculture is not an exception. IoT, along with artificial intelligence (AI) and other technologies, is the driving force behind concepts and products like wearables, smart cities, driverless cars, etc. However, the biggest impact of IoT is evident in the agricultural sector.

Throughout history, the agricultural sector has undergone massive innovations. This industry relies heavily on new ideas and technology to meet the ever-rising demand for food supply. With the advent of IoT, farmers have realized their ability to produce crops at a lesser cost. IoT is gaining vast popularity among farmers. Recent reports suggest that the amount of connected IoT devices in the agricultural industry will rise to 225 million in 2024 compared to just 13 million in 2014.

The lack of a stable internet connection was what hindered IoT adoption in its early days. However, with more internet service providers coming up and the availability of faster connectivity, IoT adoption is on the rise.

At first, using the sensors in devices, farmers monitor the water level of their tanks in real-time, helping them set up an efficient irrigation process. Now, with ultra-modern and powerful sensors, the power of IoT in the agricultural sector is vast, enabling farmers to track each step, right from planting the seeds to marketing their produce. 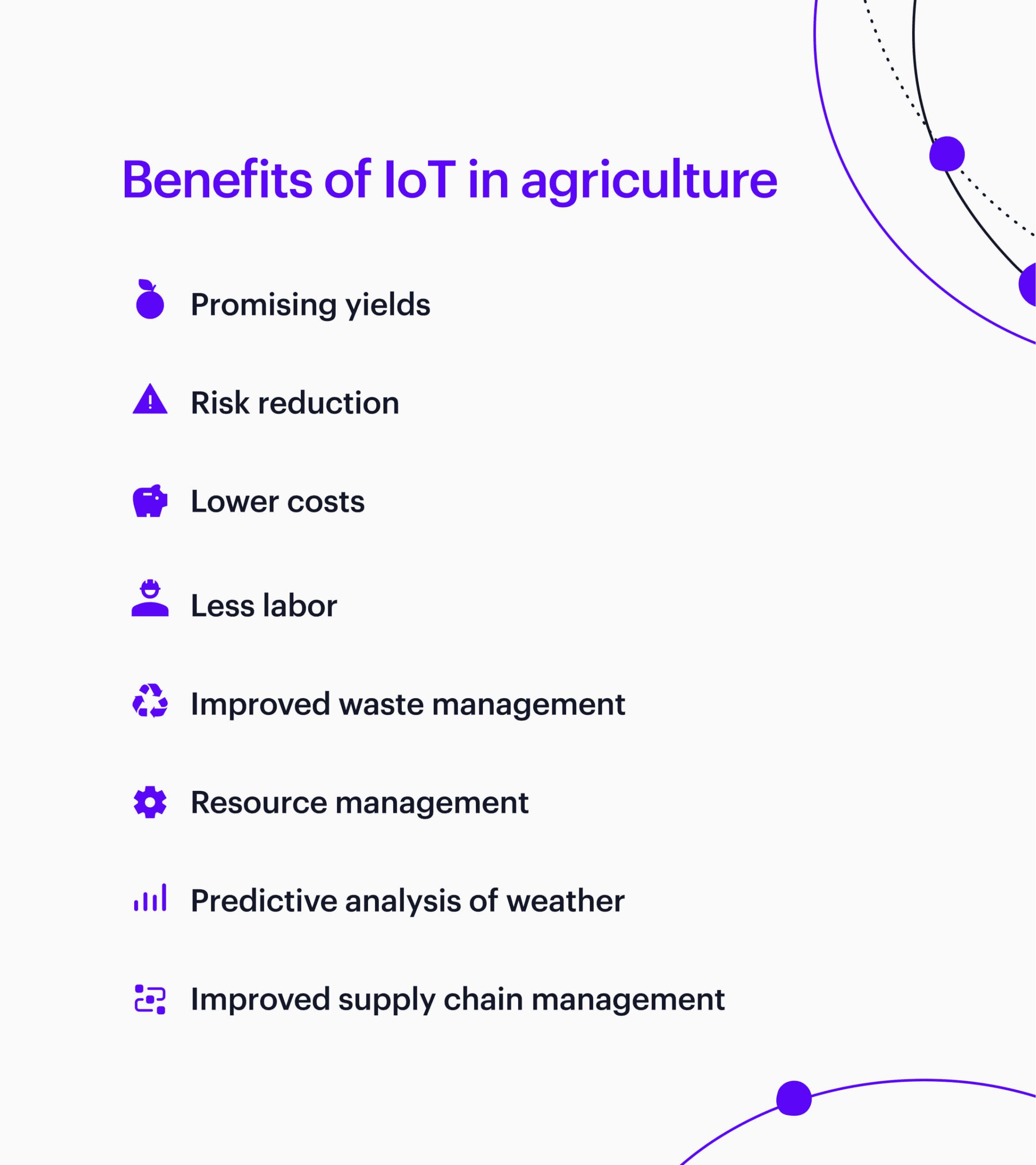 The adoption of IoT helps farmers in multiple ways. Primarily, it helps them reduce their costs while increasing their yields. IoT also helps farmers make informed decisions. Let’s look at the various benefits of IoT in the agricultural sector.

Precision farming, or precision agriculture, is one of the major applications of IoT in this sector. The practice makes farming more precise, giving farmers absolute control over many aspects. Precision farming leverages the power of smart applications like livestock tracking, inventory management, vehicle monitoring, and field observation. The technique analyzes the data captured by various sensors and acts accordingly. Farmers get accurate information about their stock or crops, prompting them to make quick and efficient decisions. There are a plethora of precision farming techniques like irrigation management, livestock control, warehouse management, and more. These techniques are vital to increasing the productivity and quality of the crops. You can even analyze the soil conditions and other parameters like the water and nutrient levels to up the operational efficiency and detect real-time working conditions of the devices.

Greenhouse farming is another popular agricultural technique that farmers widely use globally. With the advent of IoT, greenhouse farming has gotten smarter. The IoT-based system powers the greenhouse stations to adjust climatic conditions to specific needs. For example, the sensors in a greenhouse station send data like water consumption rates, humidity, and temperature to a central controller via email or SMS. As per the data, the system carries out automated and accurate smart irrigation procedures.

As the process is automated and requires no human intervention, the technique is cost-effective and accurate.

The cloud-based IoT systems help the agricultural sector make informed decisions with their data analytics capabilities. The IoT sensors collect data on a large scale and store them in cloud-based databases. Analytics tools and technologies like artificial intelligence (AI) study the data to transform it into meaningful information. For example, the system analyzes the data collected from the crops or livestock to help farmers make better decisions regarding harvesting their crops or cattle breeding. Another example is how the system provides a predictive analysis of the climatic conditions, enabling farmers to prepare for upcoming seasons, and maintain the crops and the fertility of the land.

One trendy outcome of the technological advancement that disrupts the farming sector is the introduction of agricultural drones. These IoT-powered air and ground drones perform aerial surveillance on the crops to assess crop health, crop monitoring, planting, fertilizer and pesticide spraying, and field analysis on the patches. The real-time data collected by these surveys helps the farmers make sound strategies and informed decisions regarding the crops and the field. As a result, the farmers can taste a better and high-rise makeover of their farming efforts. Drones with multispectral and temperature sensors help farmers in planning irrigation. The drones also sense the health of the crops and calculate their vegetable index, ensuring timely care and better production.

With the coming of IoT, the agricultural industry is on the path to a new-age revolution. Along with this powerful technology comes a batch of trendy applications that gives the farming sector a much-needed boost. Farmers can increase the quality and quantity of their yields while reducing production costs. With the vital data collected by these IoT sensors, farmers get accurate analysis and predictions, facilitating them in smart and informed decision-making.

Keen on understanding more about how IoT can help your agricultural business? Say hi to take a step further down the IoT journey.

Let our work do the talking

Learn about the instances where we were able to create an impact, raising the bar on the standards we set for ourselves. 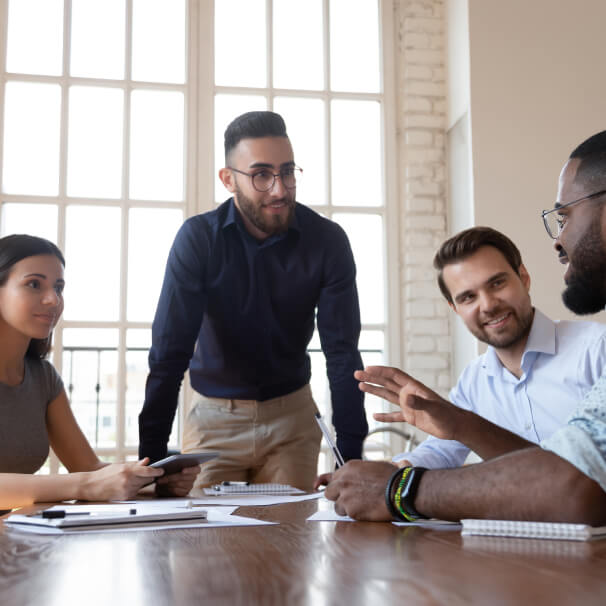 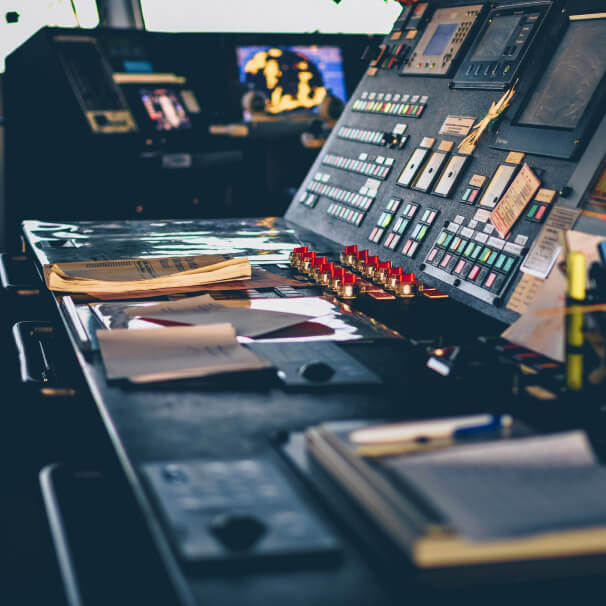 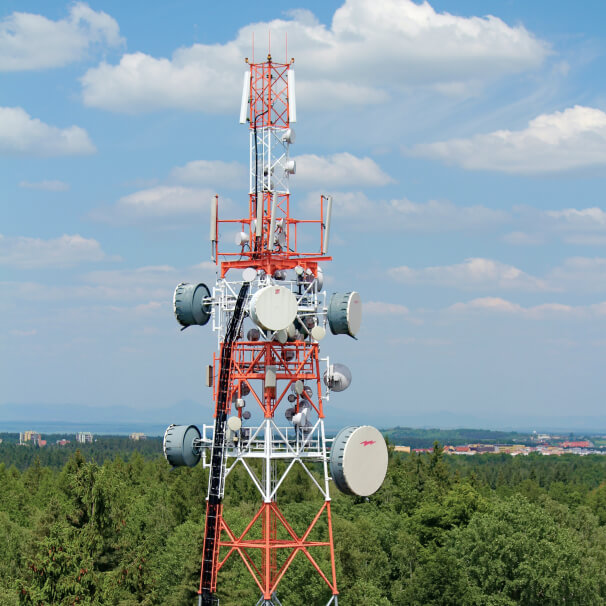 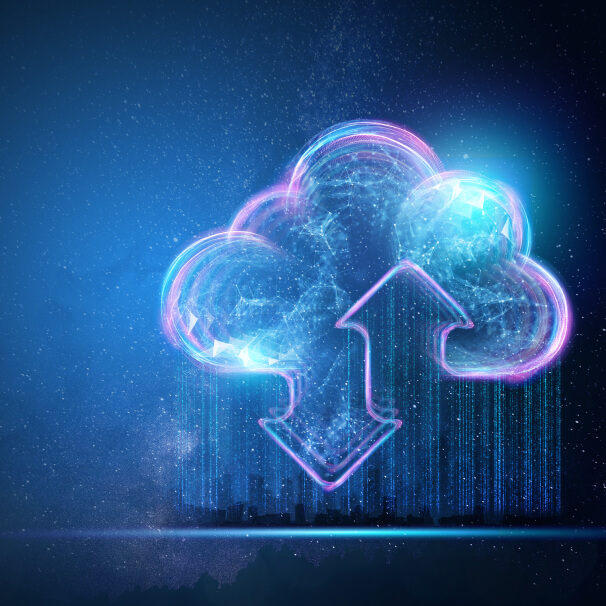 PiServe — Revolutionizing the versatility of technology in the corporate world

Have a read on groundbreaking figments of imagination of the brightest minds that have been brought to life. 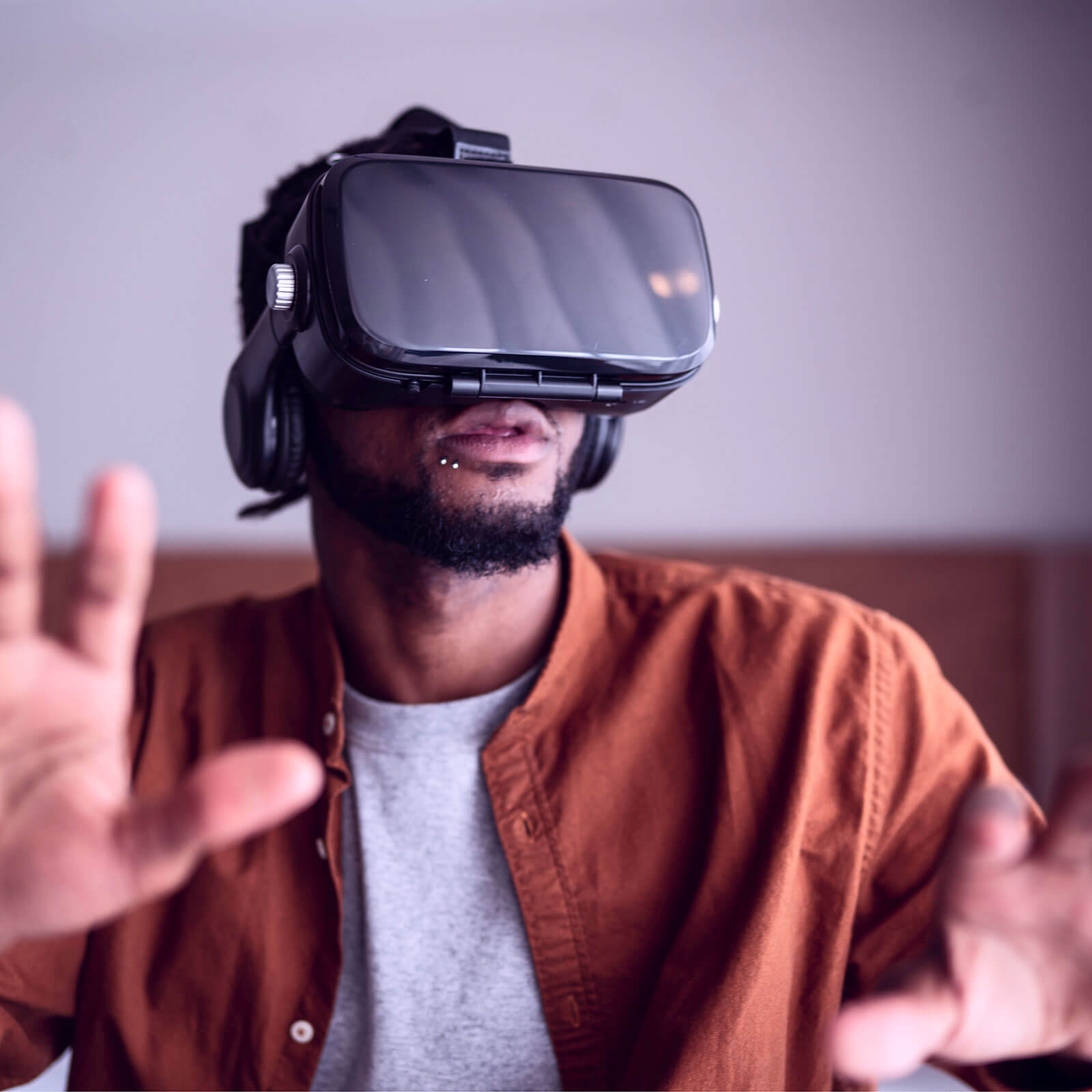 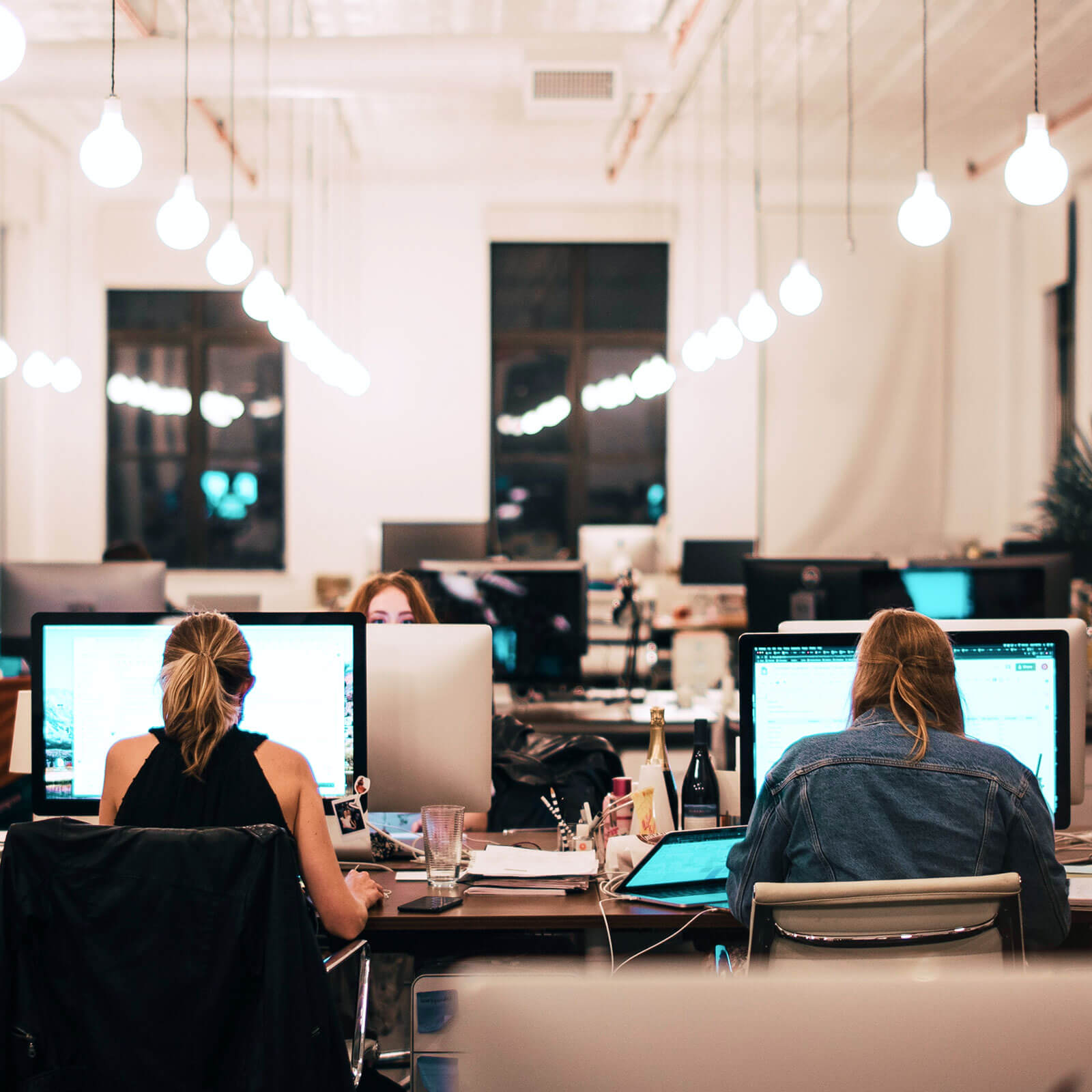 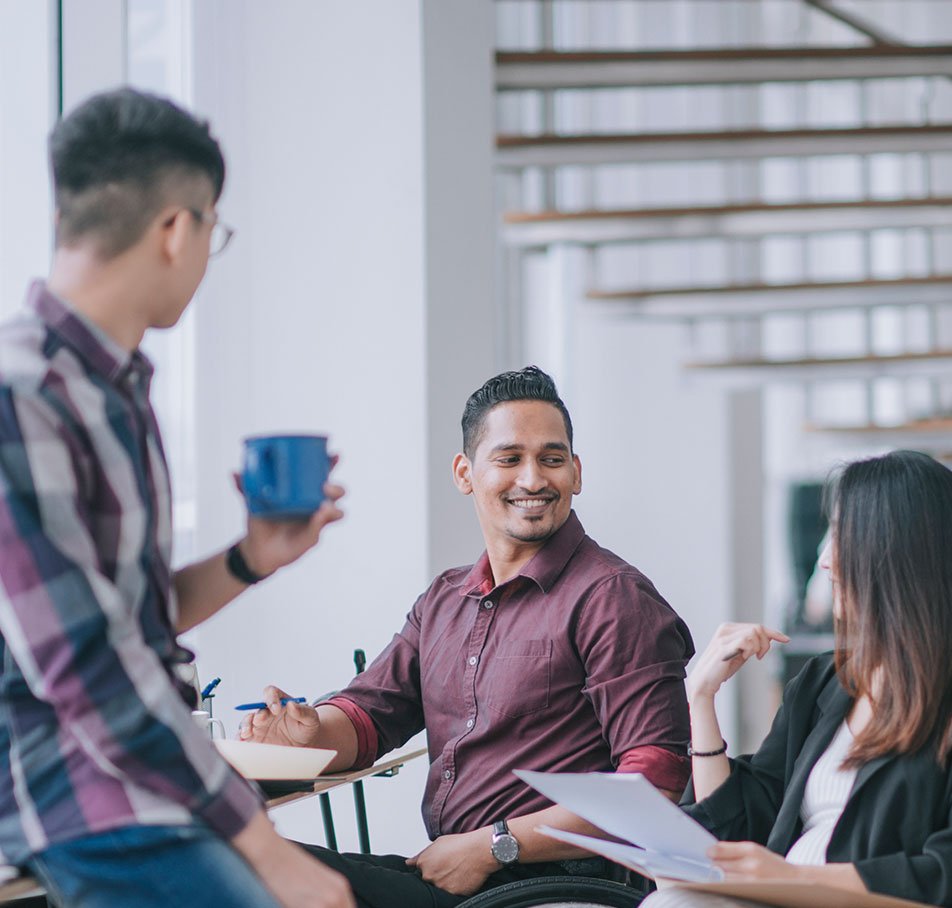 How can we help you?

Get in touch and let’s find out how we can curate our offerings to match your organization’s needs.

Never miss an insight. We’ll email you when new articles are published.